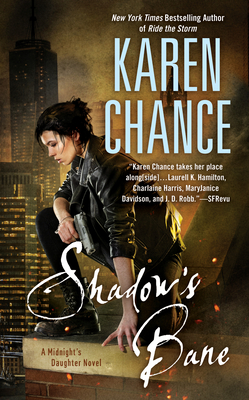 Half-human, half-vampire Dorina Basarab is back--and facing her biggest challenge yet in the next urban fantasy in the New York Times bestselling series.

Dorina Basarab is a dhampir--half-human, half-vampire. As one of the Vampire Senate's newest members, Dory already has a lot on her plate. But then a relative of one of Dory's fey friends goes missing. They fear he's been sold to a slaver who arranges fights--sometimes to the death--between different types of fey.

As Dory investigates, she and her friends learn the slavers are into something much bigger than a fight club. With the Vampire Senate gearing up for war with Faerie, it'll take everything she has to defeat the slavers--and deal with the entirely too attractive master vampire Louis-Cesare....

Karen Chance is the New York Times bestselling author of the Cassie Palmer series and the Midnight’s Daughter series. She has lived in France, the United Kingdom, and Hong Kong, but always comes back to America. She currently lives in Central Florida, the home of make-believe, which may explain a lot.

Praise for Karen Chance and her novels:

"Karen Chance doesn't disappoint. Once again we have an action-packed adventure with a strong female character that, while tough as nails and a dhampir, is also very human."—SFRevu

"In dhampir Dorina Basarab, Chance has created a sassy, tough heroine who never says die. Following these first-person adventures is going to be an adrenaline high."—RT Book Reviews

"A roller-coaster ride of a novel. . . . for those who love stories like the Mercy Thompson or Kate Daniels series."—Booklist