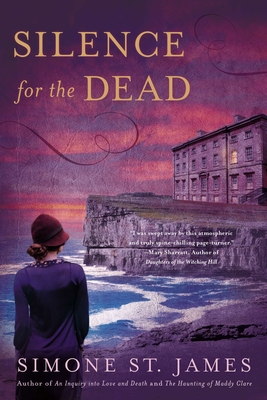 Silence for the Dead

“Portis House emerged from the fog as we approached, showing itself slowly as a long, low shadow....”

In 1919, Kitty Weekes, pretty, resourceful, and on the run, falsifies her background to obtain a nursing position at Portis House, a remote hospital for soldiers left shell-shocked by the horrors of the Great War. Hiding the shame of their mental instability in what was once a magnificent private estate, the patients suffer from nervous attacks and tormenting dreams. But something more is going on at Portis House—its plaster is crumbling, its plumbing makes eerie noises, and strange breaths of cold waft through the empty rooms. It’s known that the former occupants left abruptly, but where did they go? And why do the patients all seem to share the same nightmare, one so horrific that they dare not speak of it?

Kitty finds a dangerous ally in Jack Yates, an inmate who may be a war hero, a madman… or maybe both. But even as Kitty and Jack create a secret, intimate alliance to uncover the truth, disturbing revelations suggest the presence of powerful spectral forces. And when a medical catastrophe leaves them even more isolated, they must battle the menace on their own, caught in the heart of a mystery that could destroy them both.

Praise For Silence for the Dead…

Praise for Silence for the Dead

“Kudos for Simone St. James. I was swept away by this atmospheric and truly spine-chilling page turner, a riveting tale of dark suspense set in 1919 within a crumbling mansion turned mental hospital. If you love a good ghost story, you will be entranced.”—Mary Sharratt, author of Illuminations: A Novel of Hildegard von Bingen and Daughters of the Witching Hill

Praise for the novels of Simone St. James

“Downright scary and atmospheric. I flew through the pages of this romantic and suspenseful period piece…”—New York Times bestselling author Lisa Gardner

“The perfect book to curl up with by the fire on a stormy night...although perhaps not by yourself in an empty house!”—Katherine Webb, author of The Unseen

“Another chilling story.…St. James delivers a quickly paced read that will satisfy both new and old fans.”—Publishers Weekly

Simone St. James is the award-winning author of  An Inquiry into Love and Death and The Haunting of Maddy Clare, which won two RITA awards from Romance Writers of America and an Arthur Ellis Award from Crime Writers of Canada.  She wrote her first ghost story, about a haunted library, when she was in high school, and spent twenty years behind the scenes in the television business before leaving to write full-time. She lives in Toronto, Canada with her husband and a spoiled cat.