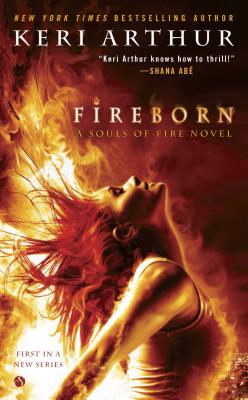 Fireborn (A Souls of Fire Novel #1)

Emberly has spent a good number of her many lives trying to save humans. So when her prophetic dreams reveal the death of Sam, a man she once loved, she does everything in her power to prevent it from happening. But in saving his life, she gets more than she bargained for.

Sam is working undercover for the Paranormal Investigations Team, and those who are trying to murder him are actually humans infected by a plaguelike virus, the Crimson Death—a by-product of a failed government experiment intended to identify the enzymes that make vampires immortal. Now all those infected must be eliminated.

But when Emberly’s boss is murdered and his irreplaceable research stolen, she needs to find the guilty party before she goes down in flames....

Praise For Fireborn (A Souls of Fire Novel #1)…

"Keri Arthur has again blown me away. Her worlds are so complex and 'real'....I highly recommend Arthur's books."—USA Today

“Keri Arthur’s imagination and energy infuse everything she writes with zest.”—Charlaine Harris

"Risa Jones is a one of a kind; she is the next generation's paranormal superheroine."—Joyfully Reviewed on the Dark Angels novels

"Arthur is positively one of the best urban fantasy authors in print today."—Darque Reviews

Keri Arthur, New York Times bestselling author of the Dark Angels and Riley Jenson Guardian series, has written more than thirty books. She’s been nominated in the Best Contemporary Paranormal category of the Romantic Times Reviewers’ Choice Awards and has won a Romantic Times Career Achievement Award for urban fantasy. She lives with her daughter in Melbourne, Australia.
Loading...
or support indie stores by buying on