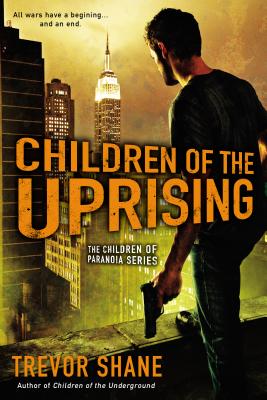 Children of the Uprising

What side do you choose when you don’t even know what War you’re fighting?

Over generations, the War has grown. It has become bloodier. Both sides will do anything to win. But with the involvement of a third faction—one that wants to put an end to the violence finally—even more enemies lurk around every corner.

Strangers have been watching Christopher for his entire life. He doesn’t know why, but he knows that he has paranoia in his blood. He has prepared since he was young for the day that they would stop watching and come for him. On his eighteenth birthday, Christopher is attacked. Though he escapes with his life, he finds himself thrust into a War he never knew existed.

To the people of the War, Christopher is a legend, the hero or the villain who may one day bring an end to the conflict. But Christopher knows only that he isn’t willing to become anyone’s pawn....

Praise for Children of Paranoia

“A gripping journey into a secret war where literally anyone could kill you...This book will stay with you long after you’ve raced to the end.”—Chris Farnsworth, author of Blood Oath

“A roller-coaster ride that one won’t soon forget.”—New York Journal of Books

“An action-packed story of war, intrigue, and twists and turns.”—News and Sentinel (Parkersburg, WV)

“Children of Paranoia, the first installment of a planned trilogy, never flags and kept this reader’s attention rapt until its end.”—Psychology Today