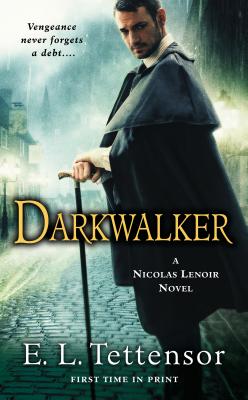 He used to be the best detective on the job. Until he became the hunted...

Once a legendary police inspector, Nicolas Lenoir is now a disillusioned and broken man who spends his days going through the motions and his evenings drinking away the nightmares of his past. Ten years ago, Lenoir barely escaped the grasp of the Darkwalker, a vengeful spirit who demands a terrible toll on those who have offended the dead. But the Darkwalker does not give up on his prey so easily, and Lenoir has always known his debt would come due one day.

When Lenoir is assigned to a disturbing new case, he treats the job with his usual apathy—until his best informant, a street savvy orphan, is kidnapped. Desperate to find his young friend before the worst befalls him, Lenoir will do anything catch the monster responsible for the crimes, even if it means walking willingly into the arms of his own doom…

"[A] definite winner...E. L. Tettensor crafts a tale that makes you think even while you shudder--a delightful combination. Darkwalker is brilliant!"--Fresh Fiction

"Tettensor's first novel tackles some complex issues while simultaneously delivering a Victorian-esque crime drama that is sure to have readers hoping for a sequel. Darkwalker is a strong debut that will appeal to fans of both fantasy and mystery."--Owlcat Mountain

"A fantastic debut novel set in a wonderfully realized world."--Nothing But the Rain

E.L. Tettensor likes her stories the way she likes her chocolate: dark, exotic, and with a hint of bitterness. She has visited fifty countries on four continents, and brought a little something back from each of them to press inside the pages of her books. She lives with her husband in Brooklyn, NY.
Loading...
or
Not Currently Available for Direct Purchase