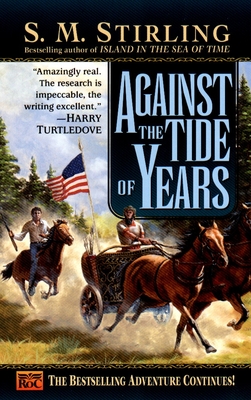 Against the Tide of Years

“STIRLING HAS SURPASSED HIS PREVIOUS WORK,” raved Science Fiction Chronicle of his bestselling novel Island in the Sea of Time, and George R. R. Martin hailed it as “an utterly engaging account of what happens when the isle of Nantucket is whisked back into the Bronze Age.” Now, the adventure continues...

In the years since the Event, the Republic of Nantucket has done its best to recreate the better ideas of the modern age. But the evils of its time resurface in the person of William Walker, renegade Coast Guard officer, who is busy building an empire for himself based on conquest by technology. When Walker reaches Greece and recruits several of their greater kinglets to his cause, the people of Nantucket have no choice. If they are to save the primitive world from being plunged into bloodshed on a twentieth-century scale, they must defeat Walker at his own game: war.

Praise For Against the Tide of Years: A Novel of the Change (Island #2)…

“Another exciting and explosive tale of ambition, ingenuity, intrigue, and discovery. Against the Tide of Years is even more compelling than Island in the Sea of Time—but just as much fun.” – Jane Lindskold, author of When the Gods Are Silent

S. M. Stirling is the author of many science fiction and fantasy novels, including the Novels of the Change (including Prince of Outcasts, The Desert and the Blade, The Golden Princess, The Given Sacrifice, Lord of Mountains) and the Shadowspawn series (A Taint in the Blood, The Council of Shadows, Shadows of Falling Night).
Loading...
or support indie stores by buying on