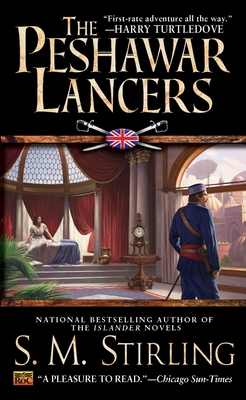 In the mid-1870s, a violent spray of comets hits Earth, decimating cities, erasing shorelines, and changing the world’s climate forever. And just as Earth’s temperature dropped, so was civilization frozen in time. Instead of advancing technologically, humanity had to piece itself back together…

In the twenty-first century, boats still run on steam, messages arrive by telegraph, and the British Empire, with its capital now in Delhi, controls much of the world. The other major world leader is the Czar of All the Russias. Everyone predicts an eventual, deadly showdown. But no one can predict the role that one man, Captain Athelstane King, reluctant spy and hero, will play…


Praise For The Peshawar Lancers…

“A wonderfully evocative adventure, told by an absolute master.”—Mike Resnick

“Aimed at readers who thrill to King, Empire, and the fluttering Union Jack…a nifty premise.”—Publishers Weekly

S. M. Stirling is the New York Times bestselling author of many science fiction and fantasy novels, including the Novels of the Change (including Prince of Outcasts, The Desert and the Blade, The Golden Princess, The Given Sacrifice, Lord of Mountains) and the Shadowspawn series (A Taint in the Blood, The Council of Shadows, Shadows of Falling Night).
Loading...
or support indie stores by buying on