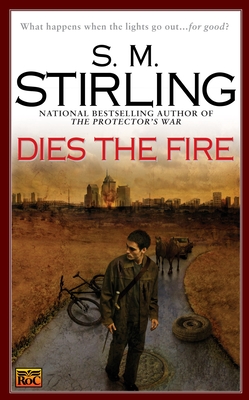 Dies the Fire (A Novel of the Change #1)

S. M. Stirling presents his first Novel of the Change, the start of the New York Times bestselling postapocalyptic saga set in a world where all technology has been rendered useless.

The Change occurred when an electrical storm centered over the island of Nantucket produced a blinding white flash that rendered all electronic devices and fuels inoperable—and plunged the world into a dark age humanity was unprepared to face...

Michael Pound was flying over Idaho en route to the holiday home of his passengers when the plane’s engines inexplicably died, forcing a less than perfect landing in the wilderness. And as Michael leads his charges to safety, he begins to realize that the engine failure was not an isolated incident.

Juniper McKenzie was singing and playing guitar in a pub when her small Oregon town was thrust into darkness. Now, taking refuge in her family’s cabin with her daughter and a growing circle of friends, Juniper is determined to create a farming community to benefit the survivors of this crisis.

But even as people band together to help one another, others are building armies for conquest...

Praise For Dies the Fire (A Novel of the Change #1)…

Praise for Dies the Fire

“A stunning speculative vision of a near-future bereft of modern conveniences but filled with human hope and determination. Highly recommended.”—Library Journal

“Post-apocalypse novels often veer either too heavily into romantic Robinsonades or nihilistic dead ends. But Stirling has struck the perfect balance between grit and glory.”—Science Fiction Weekly

“Stirling shows that while our technology influences the means by which we live, it is the myths we believe in that determine how we live. The novel’s dual themes—myth and technology—should appeal to both fantasy and hard SF readers as well as to techno-thriller fans.”—Publishers Weekly

S. M. Stirling is the author of many science fiction and fantasy novels, including the Novels of the Change and the Shadowspawn series. A former lawyer and an amateur historian, he lives in the Southwest with his wife, Jan.
Loading...
or support indie stores by buying on