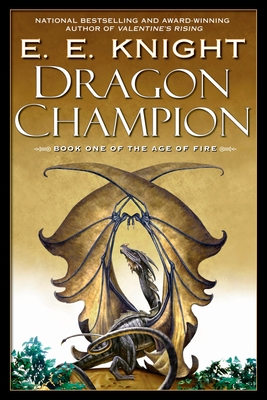 Dragon Champion (The Age of Fire #1)

From the national bestselling author of the Vampire Earth series comes the first novel in an epic fantasy saga where dragons struggle to survive in an age of fire...

High in the mountains, deep in the safety of a cave, a brood of dragons is born. The four young ones are among the last of a dying breed—the last hope for dragons’ survival. But hope shatters when a murderous group of slave-trader dwarves breaks into the cave, leaving a wake of death and destruction...

Only young Auron, a rare, defenseless gray dragon, manages to escape. Armed with nothing but his claws and a boundless determination to survive, he sets off in search of his kind. But to find other dragons—or, at least, find out who’s killing them off—Auron will have to search a world of mercenary elves, vicious humans, and dangers of all kinds. Finding allies in the strangest places—and finding himself along the way—Auron is about to make the trek of a lifetime.

Praise For Dragon Champion (The Age of Fire #1)…

Praise for the Age of Fire series

“Knight has written a classic here, a kind of Watership Down with dragons.”—Black Gate

“A unique world of medieval politics and ancient magic seen through the eyes of dragons.”—Publishers Weekly

E.E. Knight was born in Wisconsin, grew up in Minnesota, and now calls Chicago home, where he abides in domestic felicity with his family, and assorted pets.  He is the author of the Vampire Earth series and the Age of Fire series.
Loading...
or
Not Currently Available for Direct Purchase