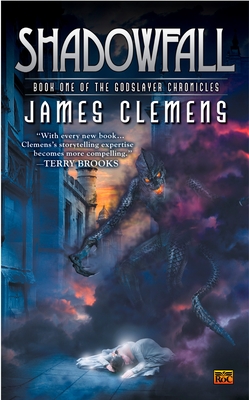 Book One of the Godslayer Chronicles

Four millennia have passed since the gods came to Myrillia, creating the nine lands of peace as a haven from the nightmarish, accursed Hinterlands. In all this time nothing has disturbed the harmony of the nine lands.

But now the goddess of the Summering Isles has been murdered. The only witness is Tylar de Noche, a crippled and disgraced former Shadowknight. As he holds the dying goddess, her last breath bestows a powerful blessing on him-a mark that heals his broken body. A mark that many see as proof that he killed a god. A mark that unleashes a powerful force of darkness within him.

Chased across Myrillia by enemies both human and ethereal, Tylar must uncover and face down a being powerful enough to kill an immortal-the true godslayer. For if he fails, all of Myrillia will fall into shadow.


Praise For Shadowfall: Book One of the Godslayer Chronicles…

James Clemens was born in Chicago, Illinois, in 1961. With his three brothers and three sisters, he was raised in the Midwest and rural Canada. He attended the University of Missouri and graduated with a doctorate in veterinary medicine in 1985. The lure of ocean, sun, and new horizons eventually drew him to the West Coast, where he established his veterinary practice in Sacramento, California. He is the author of the Godslayer Chronicles.
Loading...
or
Not Currently Available for Direct Purchase