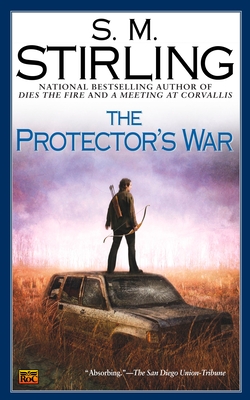 The Protector's War (A Novel of the Change #2)

It’s been eight years since the Change rendered technology inoperable across the globe. Rising from the ashes of the computer and industrial ages is a brave new world. Survivors have banded together in tribal communities, committed to rebuilding society. In Oregon’s Willamette Valley, former pilot Michael Havel’s Bearkillers are warriors of renown. Their closest ally, the mystical Clan Mackenzie, is led by Wiccan folksinger Juniper Mackenzie. Their leadership has saved countless lives.

But not every leader has altruistic aspirations. Norman Arminger, medieval scholar, rules the Protectorate. He has enslaved civilians, built an army, and spread his forces from Portland through most of western Washington State. Now he wants the Willamette Valley farmland, and he’s willing to wage war to conquer it.

And unknown to both factions is the imminent arrival of a ship from Tasmania bearing British soldiers...


Praise For The Protector's War (A Novel of the Change #2)…

“Readers who relish a battle between the forces of light and darkness, along with many frissons about what civilization means, are in for a rousing good time.” – Science Fiction Weekly

“Reminds me of Poul Anderson at his best.” – David Drake

“[A] vivid portrait of a world gone insane.” – Statesman Journal (Salem, OR)

S. M. Stirling is the New York Times bestselling author of many science fiction and fantasy novels, including the Novels of the Change (including Prince of Outcasts, The Desert and the Blade, The Golden Princess, The Given Sacrifice, Lord of Mountains) and the Shadowspawn series (A Taint in the Blood, The Council of Shadows, Shadows of Falling Night).
Loading...
or support indie stores by buying on