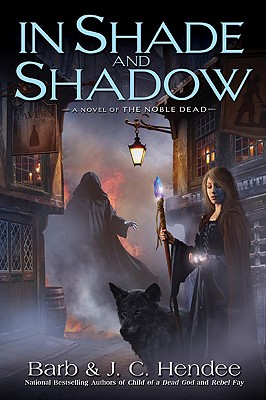 In Shade and Shadow

A Novel of The Noble Dead

The national bestselling Noble Dead saga is "one of those [series] for which the term dark fantasy was definitely intended" (Chronicle).

After her adventures with Magiere and Leesil, Wynn Hygeorht has returned to the Guild of Sagecraft, bearing texts supposedly penned by vampires from the time of the Forgotten History and the Great War. Seized by the Guild's scholars and sent out for copying without Wynn's consent, several pages disappear--and the two sages charged with conveying these pages are murdered. Suspicious of the Guild, separated from the only friends she fully trusts, and convinced the Noble Dead are responsible for the killings, Wynn embarks on a quest to uncover the secrets of the texts.

Barb and J. C. Hendee live in a quirky little town near Portland, Oregon, with two geriatric and quite demanding cats. Barb's short fiction has appeared in numerous genre magazines and anthologies. She is the author of the Vampire Memories series. J.C.'s poetry, nonfiction, and short fiction have also appeared in many genre magazines. Visit their website at www.nobledead.org.
Loading...
or
Not Currently Available for Direct Purchase