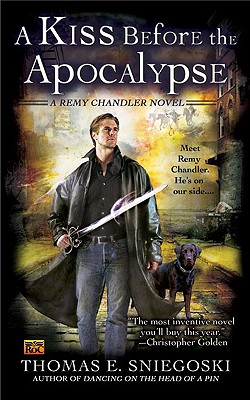 A Kiss Before the Apocalypse (A Remy Chandler Novel #1)

Generations ago, angel Remiel chose to renounce heaven and live on Earth. He found a place among ordinary humans by converting himself into Boston P.I. Remy Chandler, but he can never tell anyone who he was or that he still has angelic powers. Remy can will himself invisible, speak and understand any foreign language (including any animal language), and hear the thoughts of others. All these secret powers come in handy for a private investigator, especially when the Angel of Death goes missing and he’s assigned to find him. As he gets deeper into the investigation, he realizes this is not a missing persons case but a conspiracy to destroy the human race and only Remy has the powers to stop the forces of evil.

Thomas E. Sniegoski is a full-time writer of young adult novels, urban fantasy, and comics. His works include The New York Times bestselling Fallen series, the Remy Chandler novels, the graphic novel The Raven’s Child, as well as contributions to famous comics such as Batman, Buffy the Vampire Slayer, and B.P.R.D.
Loading...
or
Not Currently Available for Direct Purchase