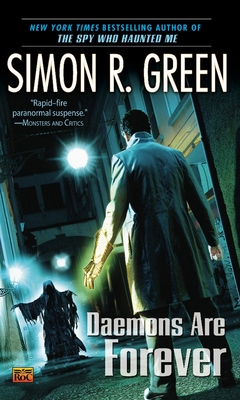 “Fans of fast-paced heroics, featuring a snarky knight armored in silver and sarcasm, need look no further; Eddie Drood is your guy.”—SF Revu

For centuries, the Droods have been fighting the monsters in the shadows so that the rest of you lot can go about your everyday lives. These days, I’m the head of the family, and it’s fallen to me to deal with a bit of a mess left over from World War II.

Seems that back then the Droods made a pact with a bunch of demons known as the Loathly Ones to fight some really nasty buggers called up by the Nazis. Once the war was over, we couldn’t get rid of them. Now they’re calling their masters to invade and destroy our world...and we Droods are the last, best hope of stopping them.

I’d say that the world is in a major lot of trouble.

Praise for the Secret Histories Novels

“I love going on adventures with Eddie Drood....Simon R. Green takes the superhero/spy tropes and turns them upside down.”—Fresh Fiction

“Tons of plot, nonstop semicomic action, and further revelations about the entire Drood brood and their mysterious mission—what’s not to enjoy?”—Kirkus Reviews

“A dynamite new entry in this rollicking adventure series, with its James Bond–of-the-supernatural style.”—SFRevu

“Green’s Drood books are fun, funny, and action-packed, and Eddie is one of his most entertaining creations.”—Booklist

“A rapid-fire paranormal suspense.”—Monsters and Critics

Simon R. Green is a New York Times bestselling author whose works include the Secret Histories Novels, the Novels of the Nightside, the Ghost Finders series, and the Deathstalker series. He lives in England.
Loading...
or
Not Currently Available for Direct Purchase