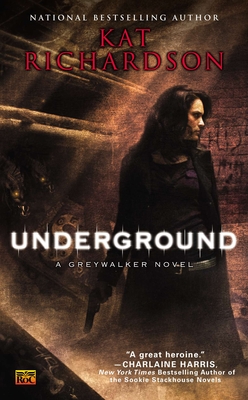 In the cold of winter, Pioneer Square's homeless are being butchered, and zombies have been seen roaming the streets of the underground city buried beneath modern Seattle. Greywalker H arper Blaine is asked to investigate by her friend Quinton, who fears he may be implicated in the deaths. They soon discover that someone has unleashed a monster of ancient legend- and H arper must deal with both the living and the dead to find the creature and put a stop to it...unless it stops her first.

Praise For Underground: A Greywalker Novel…

"Following in the tradition of Tanya Huff and Jim Butcher, this is a strong addition to the growing body of urban fantasy mysteries."
-Library Journal

Kat Richardson lives on a sailboat in Seattle with her husband, a crotchety old cat, and two ferrets. She rides a motorcycle, shoots target pistol, and does not own a TV.
Loading...
or
Not Currently Available for Direct Purchase