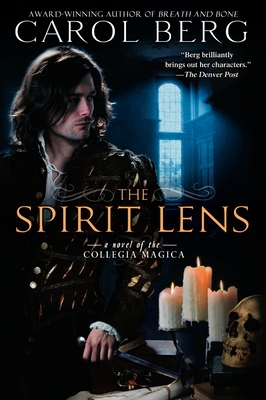 A Novel of the Collegia Magica

View our feature on Carol Berg’s The Spirit Lens. A brand new fantasy trilogy from an author who "brilliantly brings out her characters" (Denver Post).

For Portier de Savin-Duplais, failed student of magic, sorcery's decline into ambiguity and cheap illusion is but a culmination of life's bitter disappointments. Reduced to tending the library at Sabria's last collegia magica, he fights off despair with scholarship. But when the King of Sabria charges him to investigate an attempted murder that has disturbing magical resonances, Portier believes his dreams of a greater destiny might at last be fulfilled...

Praise For The Spirit Lens: A Novel of the Collegia Magica…

Though Colorado is home, Carol Berg's roots are in Texas, in a family of teachers, musicians, and railroad men. She has degrees in mathematics from Rice University and computer science from the University of Colorado, but managed to squeeze in minors in English and art history along the way. She has combined a career as a software engineer with her writing, while also raising three sons. She lives with her husband at the foot of the Colorado mountains.
Loading...
or
Not Currently Available for Direct Purchase