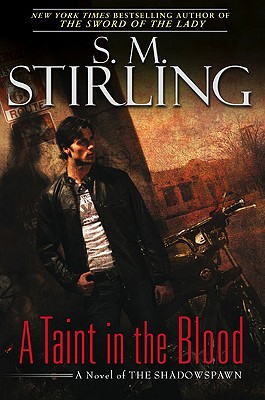 View our feature on S.M. Stirling's "A Taint in the Blood."First in the new Shadowspan series from the "New York Times" bestselling "master of speculative fiction" ("Library Journal").
Eons ago, Homo Lupens ruled the earth. Possessing extraordinary powers, they were the source of all of the myths and legends of the uncanny. And though their numbers have been greatly reduced, they exist still-though not as purebreds.
Adrian Breze is one such being. Wealthy and reclusive, he is more Shadowspawn than human. But he rebelled against his own kind, choosing to live as an ordinary man. Now, to save humanity, he must battle the dark forces of the world-including those in his own blood...


Praise For A Taint in the Blood: A Novel of the Shadowspawn…

Though apparently human, Adrian Breze belongs to the ancient species Homo Lupens--also known as Shadowspawn--the elder race whose existence gave rise to the legends of supernatural creatures. When his sister, a passionate believer in the supremacy of their kind, threatens Adrian's human lover, he must once again become embroiled in the intrigues and dangers of a hidden war against humankind.
VERDICT: The author of the popular "Change" novels (Dies the Fire, The Protector's War) begins a new urban fantasy series featuring a variant version of werewolves, bringing to it an extraordinary eye for detail and a feel for characterizations. Some graphic scenes of sex and violence, both typical of the genre, make this suitable for mature readers.
-Booklist

S. M. Stirling is the author of numerous novels, both on his own and in collaboration. A former lawyer and an amateur historian, he lives in the Southwest with his wife, Jan.
Loading...
or
Not Currently Available for Direct Purchase