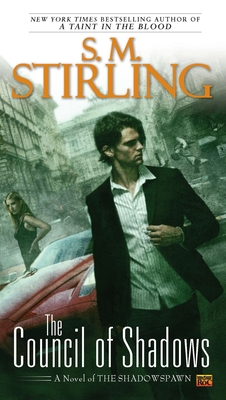 The Council of Shadows

S. M. Stirling—the New York Times bestselling author of the Novels of the Change—continues his “exciting new Urban Fantasy trilogy”* in which the fate of humanity rests in the bloody hands of those who are far from human…

Adrian Breze has long defied his pure-bred Shadowspawn heritage as part of an ancient race of shapeshifters who once reigned supreme. But when his ruthless sister Adrienne kidnapped his human lover Ellen, he emerged from seclusion to rescue her.

Before her defeat, Adrienne revealed that the Council of Shadows was marshalling its strength to rule the world once again. To stop them, Adrian and Ellen must ally with the Brotherhood, a resistance group dedicated to breaking the Council's hold on humankind.

In the coming confrontation, Adrian must fight not only the members of the Council but also his own nature...and, he will come to suspect, traitors within the Brotherhood itself…

S. M. Stirling is the author of numerous novels, both on his own and in collaboration. A former lawyer and an amateur historian, he lives in the Southwest with his wife, Jan.
Loading...
or
Not Currently Available for Direct Purchase