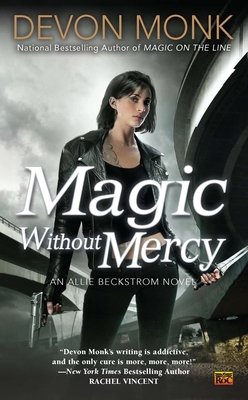 Allison Beckstrom’s talent for tracking spells has put her up against some of the darkest elements in the world of magic. But she’s never faced anything like this.

Magic itself has been poisoned, and Allie’s undead father may have left the only cure in the hands of a madman. Hunted by the Authority—the secret council who enforces the laws–wanted by the police, and unable to use magic, she’s got to find the cure before the sickness spreads beyond any power to stop it.

But when a death magic user seeks to destroy the only thing that can heal magic, Allie and her fellow renegades must stand and fight to defend the innocent and save all magic…


Praise For Magic Without Mercy: An Allie Beckstrom Novel…

“Fiendishly original and a stay-up-all-night read.”

“Allie’s adventures are gripping and engrossing, with an even, clever mix of humor, love, and brutality.”

“This is an absolutely awesome series.”

Devon Monk has one husband, two sons, and a dog named Mojo. She has sold over fifty short stories to fantasy, science fiction, horror, humor, and young adult magazines and anthologies. Her stories have been published in five countries and included in a Year's Best Fantasy collection. When not writing, Devon is either knitting, remodeling the house-that-was-once-a-barn, or hosting a family celebration.
Loading...
or
Not Currently Available for Direct Purchase