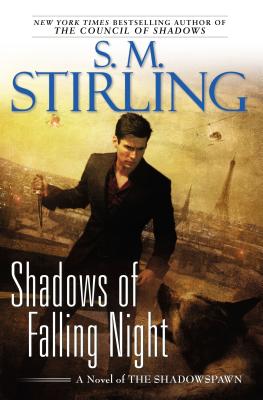 At last, S. M. Stirling, the "New York Times "bestselling author of the Novels of the Change, presents the stunning climax to his Shadowspawn trilogy the ultimate confrontation, in which the fate of all humanity hangs in the balance....
She's back....
Near-purebred home nocturnus Adrian Breze and his human mate, Ellen, thought they had dealt with his twin sister, Adrienne. In fact, they thought she was dead.
But she survived and now leads a faction of the Shadowspawn the ancient, shape-shifting, blood-drinking breed who secretly control the world that wants to leave just enough of the human race alive to satisfy their hunger and serve their needs. She has nothing but hatred and contempt for her brother, who remains on the side of humanity, fighting with the Brotherhood against the Shadowspawn.
To defeat him, she has suborned his mentor the greatest warrior of the Brotherhood. The man thinks he's bringing a weapon to the Council of Shadows that will wipe out the Shadowspawn's leaders. In truth, his actions will make Adrienne demon-goddess of the world...unless Adrian and Ellen can turn him back in time.

S. M. Stirling is the author of many science fiction and fantasy novels.He is aformer lawyer and an amateur historian."

Praise For Shadows of Falling Night…

Praise for the Novels of the Shadowspawn:


“[Stirling] begins a new urban fantasy series featuring a variant version of werewolves, bringing to it an extraordinary eye for detail and a feel for characterizations.”—Library Journal

The Council of Shadows

“Stirling mixes the vampire mythology with black noir to create a twisting, turning urban fantasy with broad appeal...[an] inventive, engaging tale that shows no signs of slowing down.”—Monsters and Critics

Praise for S. M. Stirling and His Novels of the Change:

“Nobody wrecks a world better than S. M. Stirling, and nobody does a better job of showing that people remain people, with all their high points and low, in the wreckage.”—Harry Turtledove, New York Times Bestselling Author of Supervolcano: All Fall Down

“Stirling has blazed a clear comet trail across his postapocalyptic landscape that illuminates both the best and the worst of which our species is capable.”—Science Fiction Weekly

“Stirling is a perfect master of keep-them-up-all-night pacing, possibly the best in American SF, quite capable of sweeping readers all the way to the end.”—Booklist (Starred Review)

“Vivid....Stirling eloquently describes a devastated mystical world that will appeal to fans of traditional fantasy as well as postapocalyptic SF.”—Publishers Weekly (Starred Review)