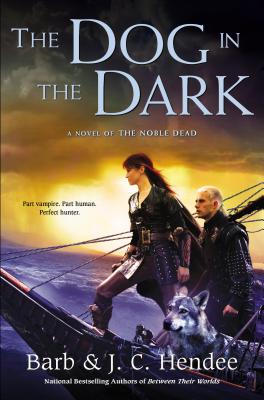 The Dog in the Dark (Hardcover)

The Noble Dead series has been hailed as a crowd-pleasing mix of intrigue, epic fantasy, and horror. * Now, national bestselling authors Barb and J.C. Hendee present the latest thrilling novel following the adventures of dhampir Magiere and half-elf Leesil
Barely escaping the city of Calm Seatt and the assassins hunting them Magiere, Leesil, and the elven dog Chap sail south to continue their quest to find the powerful Orb of Air before their enemies do. But they are not alone, much to their frustration.
The aging elven assassin Brot an has forced himself on them by offering his protection. Chap doesn t believe this ruse, however, and seeks to uncover the assassin's true agenda as well as the cause of the secret civil war that has erupted into the open among Brot'an's people.
Meanwhile, Magiere struggles with her own dark nature, using Leesil's love as an anchor to keep her grounded. For the personal price she paid to procure the Orb of Fire was more than she thought and more than she wants to reveal to anyone.
But that is exactly what the cunning Brot an wants to know. And he is willing to do whatever it takes even if he must reveal his own dreaded secrets that may cost the entire party their lives and their very souls.
*"Publishers Weekly.

Praise For The Dog in the Dark…

Praise for The Noble Dead Saga   “A mix of The Lord of the Rings and Buffy the Vampire Slayer.”—New York Times Bestselling Author Kevin J. Anderson   “The Noble Dead Saga…is no simple myth, but rather a true epic, which stands at the highest levels of fantasy lore.”—BSC Review