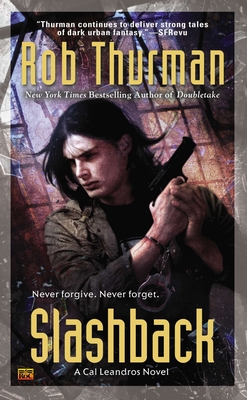 I stopped and let them circle me, first because it was intriguing and, second, because, honestly, what could they do? Only knives, but all armed, and that made them even more interesting. Interesting. Fun.

Taking on bloodthirsty supernatural monsters is how Caliban and Niko Leandros make a living. But years ago—before they became a force to be reckoned with—the brothers were almost victims of a very human serial killer.

“Amazingly, Ms. Thurman continues to create even more stirring tales of the uncannily talented duo even as she provides glimpses of the life that has honed them into the well-tempered and close-knit pair that they are…An intriguing series.”—Night Owl Reviews

“There’s no one who does dark urban fantasy quite like Rob Thurman..”—The Ranting Dragon

Rob Thurman lives in Indiana, land of cows, corn, and ravenous wild turkeys. Rob is the author of the Cal Leandros novels; the Trickster novels; the Korsak Brothers novels; and several stories in various anthologies. Besides ravenous wild turkeys, Rob has three rescue dogs (if you don’t have a dog, how do you live?)—one of which is a Great Dane–Lab mix that weighs well over one hundred pounds, barks at strangers like Cujo times ten, then runs to hide under the kitchen table and pee on herself. Burglars tend to find this a mixed message. The other two dogs, however, are more invested in keeping their food source alive. All were adopted from the pound (one on his last day on death row). They were all fully grown, already house-trained, and grateful as hell. Think about it the next time you’re looking for a Rover or a Fluffy.
Loading...
or
Not Currently Available for Direct Purchase