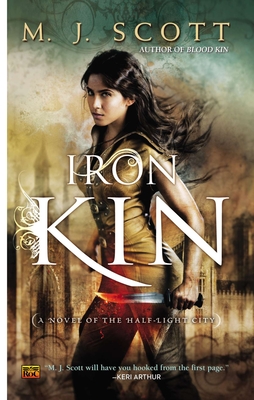 A Novel of the Half-Light City

Imagine a city divided. Fae and human mages on one side, vampire Blood Lords and shape-shifting Beast Kind on the other. Between these supernatural forces stands a peace treaty that threatens to shatter at the slightest provocation....

I was raised to do the right thing. But to my family that means staying safe behind the walls of human society. To be a respectable metalmage and never put myself at risk. But the treaty is faltering. And if it fails, nothing is safe. To help save the city and everyone I care about, I will use whatever means I can to ensure the negotiations to renew the treaty are successful—even if that means forging an alliance with a man who is the very opposite of the right thing....

Fen is trouble. Wild. He would rather bind himself in iron and drink himself into oblivion than learn to master the visions that come to him. Those visions might just hold the key to peace, and it seems that my power might hold the key to his control—if I can keep it around him....


Praise For Iron Kin: A Novel of the Half-Light City…

Praise for the Novels of the Half-Light City

“Shadow Kin is an entertaining novel. Lily and Simon are sympathetic characters who feel the weight of past actions and secrets as they respond to their attraction for each other.”—New York Times bestselling author Anne Bishop

“M. J. Scott weaves a fantastic tale of love, betrayal, hope, and sacrifice against a world broken by darkness and light where the only chance for survival rests within the strength of a woman made of shadow and the faith of a man made of light.”—national bestselling author Devon Monk

M. J. Scott is the author of the The Shattered Court and the Half-Light City novels: Shadow Kin, Blood Kin, Iron Kin, and Fire Kin. She is an unrepentant bookworm. Luckily, Scott grew up in a family that fed her a properly varied diet of books, and these days she's surrounded by people who are understanding of her story addiction. When not wrestling with one of her own stories, she can generally be found reading someone else’s. Her other distractions include yarn, cat butlering, dark chocolate, and fabric. She lives in Melbourne, Australia.
Loading...
or
Not Currently Available for Direct Purchase