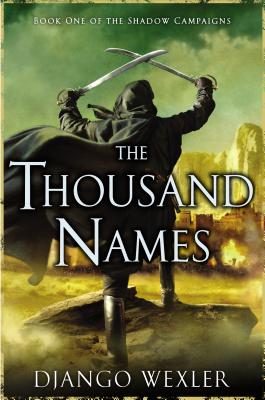 Book One of the Shadow Campaigns

Enter an epic fantasy world that echoes with the thunder of muskets and the clang of steel but where the real battle is against a subtle and sinister magic....
Captain Marcus d Ivoire, commander of one of the Vordanai empire's colonial garrisons, was resigned to serving out his days in a sleepy, remote outpost. But that was before a rebellion upended his life. And once the powder smoke settled, he was left in charge of a demoralized force clinging tenuously to a small fortress at the edge of the desert.
To flee from her past, Winter Ihernglass masqueraded as a man and enlisted as a ranker in the Vordanai Colonials, hoping only to avoid notice. But when chance sees her promoted to command, she must win the hearts of her men and lead them into battle against impossible odds.
The fates of both these soldiers and all the men they lead depend on the newly arrived Colonel Janus bet Vhalnich, who has been sent by the ailing king to restore order. His military genius seems to know no bounds, and under his command, Marcus and Winter can feel the tide turning. But their allegiance will be tested as they begin to suspect that the enigmatic Janus's ambitions extend beyond the battlefield and into the realm of the supernatural a realm with the power to ignite a meteoric rise, reshape the known world, and change the lives of everyone in its path.

Praise For The Thousand Names: Book One of the Shadow Campaigns…

“Wexler has produced something unusual in the fantasy line, with a setting reminiscent of the early Victorian period, out on the bleeding edge of Empire, a world of dust and bayonets and muskets...and magic. The characters are fascinating and all of them have secrets. The heroes range from the noble to the distinctly ambiguous....I read it at a gulp and look forward to more.”—S. M. Stirling, New York Times Bestselling Author of Lord of Mountains

“I would wholeheartedly recommend The Thousand Names, not only to fans of fantasy but also to fans of military fiction of all types. Fans of Steven Erikson, David Drake, Glen Cook, Naomi Novik, Tom Kratman, Jack Campbell, David Weber, and John Ringo take note – there’s a new military fiction cowboy in town and his name is Django.” – SFSignal.com

“The scenes of military life and combat tactics are well crafted, and Winter and Marcus’s respective successes keep the story moving swiftly enough until the darker secret and elements of the fantastic make themselves known.” – Publishers Weekly

Django Wexler graduated from Carnegie Mellon University in Pittsburgh with degrees increativewriting andcomputerscience, and worked for the university in artificial intelligence research. Eventually he migrated to Microsoft in Seattle, where he now lives with two cats and a teetering mountain of books. When not planning Shadow Campaigns, he wrangles computers, paints tiny soldiers, and plays games of all sorts. He is also the author of a forthcoming middle-grade series.