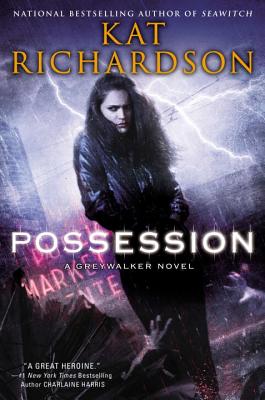 When a comatose woman suddenly wakes up and starts painting scenes she’s never witnessed, with a skill she’s never had, medical science has no explanation. As more bizarre phenomena manifest, including mysterious writing appearing on the patient’s skin and strange voices issuing from her mouth, even her doctors start to wonder whether the woman may be possessed.

Frustrated, frightened, and at the end of her rope, the patient’s sister reluctantly turns to Harper Blaine to discover who—or what—is occupying her sister’s body. As Harper digs into this case of apparent possession, she discovers other patients struck with the same mystifying afflictions and a disturbing connection to one of the most gruesome episodes in Washington’s history....

“Richardson’s once-playful Harper is clearly evolving into a supernatural force to be reckoned with.”—Publishers Weekly

“Harper is one of my favorite paranormal detectives....This series is one of the best examples of true urban fantasy.”—Night Owl Reviews

“Richardson has such a natural knack for storytelling...completely captivating.”—CrimeSpree Magazine

Kat Richardson lives aboard a boat in Seattle with her husband and a small pit bull—who is not the world’s largest ferret, no matter how she pretends. Kat rides a motorcycle, shoots target pistol, and has been known to swing dance, sing, and spend insufficient time at the gym.
Loading...
or
Not Currently Available for Direct Purchase