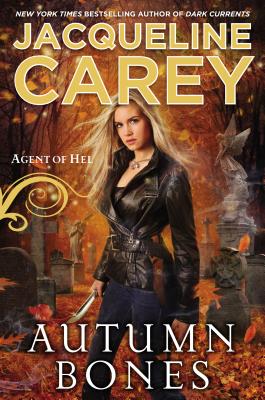 "New York Times "bestselling author Jacqueline Carey returns to the curious Midwest tourist community where normal and paranormal worlds co-exist however tenuously under the watchful eye of a female hellspawn
Fathered by an incubus, raised by a mortal mother, and liaison to the Pemkowet Police Department, Daisy Johanssen pulled the community together after a summer tragedy befell the resort town she calls home. Things are back to normal as normal as it gets for a town famous for its supernatural tourism, and presided over by the reclusive Norse goddess Hel.
Not only has Daisy now gained respect as Hel's enforcer, she's dating Sinclair Palmer, a nice, seemingly normal human guy. Not too shabby for the daughter of a demon. Unfortunately, Sinclair has a secret. And it's a big one.
He's descended from Obeah sorcerers and they want him back. If he doesn t return to Jamaica to take up his rightful role in the family, they ll unleash spirit magic that could have dire consequences for the town. It's Daisy's job to stop it, and she's going to need a lot of help. But time is running out, the dead are growing restless, and one mistake could cost Daisy everything

“Fans have come to expect the amazing from this author and her new urban fantasy series won’t disappoint them.”—Library Journal (starred review)

“Electrifying urban fantasy...that will have you racing to get to the last page. I am excited for this new series.”—Night Owl Reviews

“Daisy is a great character...reminds me of early Sookie Stackhouse.”—Dangerous Romance

“Carey knows her fantasy and this latest trip into fantasy realism is a page turner.”—San Francisco Book Review

“Unique and entertaining...this was a masterpiece.”—Under the Covers Book Review

“Full of unexpected twists...fantastically fun...I’m more than ready to jump back into this world as soon as possible.”—All Things Urban Fantasy

"New York Times "bestselling author Jacqueline Carey is the author of the critically acclaimed Kushiel s Legacy series of historical fantasy novels, The Sundering epic fantasy duology and postmodern fables "Santa Olivia "and "Saints Astray." Jacqueline enjoys doing research on a wide variety of arcane topics, and an affinity for travel has taken her from Finland to China. Although often asked by inquiring fans, she does not, in fact, have any tattoos."
Loading...
or
Not Currently Available for Direct Purchase