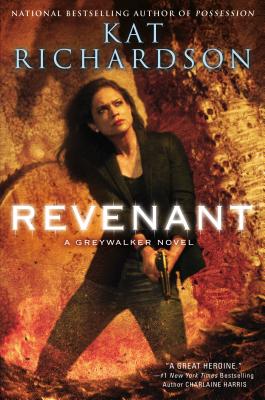 Harper Blaine was your average small-time PI until she died--for two minutes. Now Harper is a Greywalker, treading the thin line between the living world and the paranormal realm. And these abilities are landing her all sorts of -strange- cases....
Turmoil, sickness, and destruction are sweeping through Europe--and its effects are being felt all the way across the world in Seattle. Harper Blaine and her lover, Quinton, suspect that Quinton's father, James Purlis--and his terrifying Ghost Division--are involved.
Following a dark trail of grotesque crimes and black magic across the Old World, the pair slowly draws closer to their quarry. But finding and dismantling the Ghost Division won't be enough to stop the horror that Purlis has unwittingly set in motion.
An ancient and forgotten cult has allied with Quinton's mad father. And their goals are far more nightmarish than Harper and Quinton--or even Purlis--could ever imagine.
The pursuit leads to Portugal, where the desecrated tomb of a sleeping king and a temple built of bones recall Harper's very first paranormal case and hold clues to the cult's true intentions. Harper and Quinton will need all the help they can get to avert a necromantic cataclysm that could lay waste to Europe and drag the rest of the world to the brink of war.

Praise for The Greywalker Novels:

“Harper is one hell of a protagonist.”—CrimeSpree Magazine

“Kat Richardson takes lovers of the paranormal by storm in this wickedly suspenseful tale....Harper’s paranormal gifts will delight readers who love plenty of otherworldly activity.”—Fresh Fiction

“Harper is one of my favorite paranormal detectives....This series is one of the best examples of true urban fantasy.”—Night Owl Reviews

Kat Richardson lives in the wilds of western Washington, where she hunts down bits of history to turn into terrifying tales, accompanied by her husband and a rescued pit bull terrier. She is the author of the Greywalker Novels including Possession, Seawitch, Downpour, and Labyrinth. She rides a motorcycle, shoots target pistol, and digs around in the garden, because you never know what you'll find under a rock.
Loading...
or
Not Currently Available for Direct Purchase