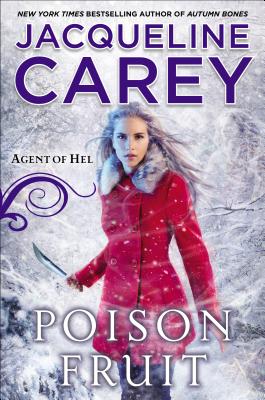 The hot-as-Hel series with the “Sookie Stackhouse type of vibe” (Paranormal Haven) is back—but this time the paranormal Midwestern town of Pemkowet is feeling a frost in the air and the residents are frozen in fear....

The Pemkowet Visitors Bureau has always promoted paranormal tourism—even if it has downplayed the risks (hobgoblins are unpredictable). It helps that the town is presided over by Daisy Johanssen, who as Hel’s liaison is authorized by the Norse goddess of the dead to keep Pemkowet under control. Normally, that’s easier to do in the winter, when bracing temperatures keep folks indoors.

But a new predator is on the prowl, and this one thrives on nightmares. Daisy is on her trail and working intimately with her partner and sometime lover from the Pemkowet PD, sexy yet unavailable werewolf Cody Fairfax. But even as the creature is racking up innocent victims, a greater danger looms on Pewkowet’s horizon.

As a result of a recent ghost uprising, an unknown adversary—represented by a hell-spawn lawyer with fiery powers of persuasion—has instigated a lawsuit against the town. If Pemkowet loses, Hel’s sovereignty will be jeopardized, and the fate of the eldritch community will be at stake. The only one who can prevent it is Daisy—but she’s going to have to confront her own worst nightmare to do it.

Praise for Jacqueline Carey and the Agent of Hel Novels

“Carey knows her fantasy and this latest trip into fantasy realism is a page-turner.” —San Francisco Book Review

“Jacqueline Carey has me hooked!”—Under the Covers

“Full of unexpected twists...fantastically fun....I’m more than ready to jump back into this world as soon as possible.”—All Things Urban Fantasy

New York Times bestselling author Jacqueline Carey is the author of the critically acclaimed Agent of Hel series which includes Autumn Bones, the Kushiel’s Legacy series of historical fantasy novels, the Sundering epic fantasy duology, and postmodern fables Santa Olivia and Saints Astray. Jacqueline enjoys doing research on a wide variety of arcane topics, and an affinity for travel has taken her from Finland to China. She lives in west Michigan. Although often asked by inquiring fans, she does not, in fact, have any tattoos.
Loading...
or
Not Currently Available for Direct Purchase