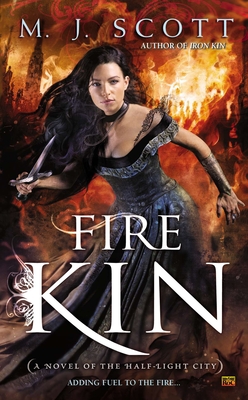 Imagine a city divided…a city readying itself for a war. The vampire Blood and the shape-shifting Beast Kind seek to seize control now that the treaty is broken. Only the humans stand in their way…but they stand without their Fae allies…and they desperately need help....

I chose to stay with the humans when the Fae withdrew from the City. I am a healer, and they need me. I know the odds are against them. I know they need reinforcements. But I never expected them to turn and seek aid from the depths of my past. Asharic is a powerful Fae, exiled by the Veiled Queen thirty years ago. Leaving me behind. But now the queen is dead and the throne is vacant, and Ash is returning to the City—my City—with his mercenary army.

It would be false to deny that there is still a spark between us, but I will not be taken in again. And I’m not the only one disturbed by his return. A Blood lord is poised to conquer the Half-Light City, and other enemies new and old are gathering to eliminate the threat Ash poses. To save the City, we will have to join forces. And pray we’re not the ones who burn…

Praise For Fire Kin (Novel of the Half-Light City #4)…

Praise for the Novels of the Half-Light City

“Shadow Kin is an entertaining novel. Lily and Simon are sympathetic characters who feel the weight of past actions and secrets as they respond to their attraction for each other.”—New York Times bestselling author Anne Bishop

“M. J. Scott weaves a fantastic tale of love, betrayal, hope, and sacrifice against a world broken by darkness and light where the only chance for survival rests within the strength of a woman made of shadow and the faith of a man made of light.”—National bestselling author Devon Monk

M. J. Scott is the author of the Half-Light City novels: Iron Kin, Blood Kin, and Shadow Kin.
Loading...
or
Not Currently Available for Direct Purchase