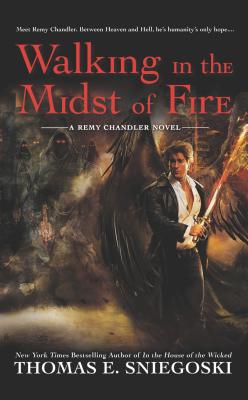 Walking in the Midst of Fire (A Remy Chandler Novel #6)

Once he was known as the angel Remiel, but generations ago, Boston PI Remy Chandler chose to renounce Heaven and live on Earth, where he found a secure place among ordinary humans....

Remy Chandler has found a new love—and his best human friend is reluctantly coming to grips with Remy’s “unusual” abilities. He’s finally reached a kind of peace between his true angelic nature and the human persona he created for himself so long ago.

But Heaven and the Legions of the Fallen still stand on the brink of war. When one of Heaven’s greatest generals is murdered, it falls to Remy to discover who—or what—might be responsible, which could trigger a final conflict that would consume the Earth.

The deeper he digs, the further he goes into a dark world of demonic assassins, secret brothels, and things unsettling even to a being who has lived for eternity. But it is not in his nature—angelic or human—to quit, no matter the personal price....

Praise for the Remy Chandler Novels

“Fast-moving, well-written, and wonderfully enchanting, this is one that fantasy readers won’t want to miss.” —Darque Reviews

“Remy and his human friends are engagingly believable characters in a series noted for flashes of humor despite its overall serious tone. Series fans and followers of Jim Butcher’s Dresden Files will enjoy this urban fantasy.”—Library Journal

Thomas E. Sniegoski is a full-time writer of YA novels, urban fantasy, and comix including the Remy Chandler novels In the House of the Wicked, A Hundred Words for Hate, and Where Angels Fear to Tread. He was born and raised in Massachusetts, where he still lives with his wife LeeAnne and their French Bulldog, Kirby.
Loading...
or
Not Currently Available for Direct Purchase