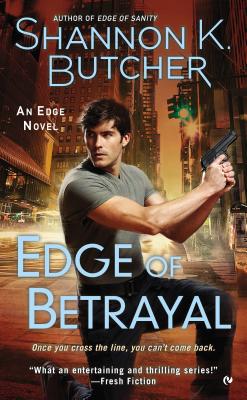 The covert organization known as the Edge is in full rescue mode, having been ordered to find the victims of the dreaded Threshold Project—and also to bring Adam Brink into the fold. Brink previously worked for Threshold, and may know how to stop the terror.

Mira Sage knows Adam’s dark past. She’s created a database of Threshold survivors whose lives were destroyed by the experiments of the twisted Dr. Stynger—and is driven to save them. If working with the duplicitous Adam will help her, she’ll play along.

Even as Mira secretly seeks to prove Adam is still a traitor, Adam has his own agenda that no one must discover. But when the two find their goals pointing in the same direction, Mira will be tested to believe in the one man she can’t trust. The one man she can’t resist…

“What an entertaining and thrilling series!”—Fresh Fiction

Since launching her career in 2007, Shannon K. Butcher has penned more than twenty titles, including the paranormal romance series the Sentinel Wars (Willing Sacrifice, Falling Blind, Dying Wish); the action-romance series the Edge (Edge of Sanity, Razor's Edge, Living on the Edge); and a handful of romantic-suspense novels and works of short fiction. Being a former engineer and current nerd, she frequently uses charts, graphs, and tables to aid her in the mechanics of story design and to keep track of all those pesky characters and magical powers. An avid beader and glass artist, she spends her free time making jewelry she often gives away in contests on her Web site.
Loading...
or
Not Currently Available for Direct Purchase