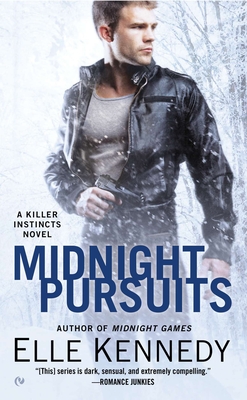 Her job is to stay hidden.
Too bad he can’t take his eyes off her.

Soldier-for-hire Ethan Hayes is the youngest member of an elite mercenary team. While he may be affectionately nicknamed the rookie, the skills Ethan honed as a Marine make him seriously dangerous. But when a sudden distress call puts him in close quarters with a rival, he finds more than his field skills being put to the test.

Juliet Mason stands out as the master thief in a covert group of assassins and spies. Her latest mission is personal—and it’s gone horribly wrong. Juliet may prefer to work alone, but when the rookie comes to her aid in snowy Eastern Europe, she can’t deny they make a good team. But even up against a powerful enemy, their most challenging task yet may be fighting the passion between them....

RITA-nominated author Elle Kennedy grew up in the suburbs of Toronto, Ontario, and holds a BA in English from York University. From an early age, she knew she wanted to be a writer and actively began pursuing that dream when she was a teenager. She loves strong heroines, alpha heroes, and just enough heat and danger to keep things interesting!

Raves for this series

“Loaded with sensuality [and] humor.”—USA Today