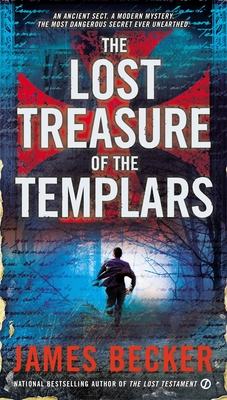 The Lost Treasure of the Templars

The New York Times bestselling author of The Templar Brotherhood presents the first novel in a thrilling series about the powerful secrets of the Knights Templar—and a conspiracy too shocking to believe...

In a quiet English seaside town, antiquarian bookseller Robin Jessop has acquired an odd medieval volume. What appears to be a book isn’t a book at all, but a cleverly disguised safe, in which she finds a single rolled parchment, written in code.

For encryption expert David Mallory, the text is impenetrable. Until an invaluable clue opens the door to a mystery, and a conspiracy, stretching back seven centuries, when the most powerful man in Europe declared war on the most powerful clan, the Knights Templar.

Now, Jessop and Mallory find themselves on a global hunt for an unsurpassed treasure and this much closer to the keys to secrets that could change history, topple an empire, and bury them both alive. Because they’re not only the hunters. They’re also the hunted.

Praise For The Lost Treasure of the Templars…

James Becker spent more than twenty years in the Royal Navy's Fleet Air Arm. Throughout his career he has been involved in covert operations in many of the world's hot spots, including Yemen, Russia, and Northern Ireland. He is the New York Times bestselling author of The Lost Treasure of the Templars and The Templar Archive as well as the Chris Bronson novels, including The Lost Testament and Echo of the Reich. He also writes action-adventure novels under the name James Barrington and military history under the name Peter Smith in the U.K.
Loading...
or support indie stores by buying on
(This book is on backorder)