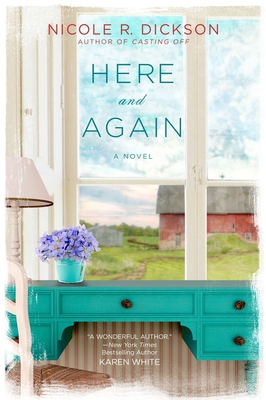 Deep in the Shenandoah Valley, the present and the past are as restless as the river mists. And when they collide, the heart is the only compass pointing home.

For nurse Ginger Martin, her late husband’s farm is both a treasured legacy and the harbinger of an uncertain future. Since he was recently killed in Iraq, every day is fraught with grief that won’t abate. Keeping the farm going and nourishing her children’s hopes without him seems as impossible as having dreams for the future—or going back into the past....

By a curious coincidence, a stranger appears in Ginger’s life, always showing up to help in unexpected and much-needed ways. He says he’s a soldier, lost and trying to make his way home, but Ginger understands that Samuel is a kindred spirit, longing to repair a life interrupted. The challenges of their hopes and longings will test who they really are in the most heartbreaking of ways. And only by coming to terms with their losses and the necessity of change will Ginger and Samuel be able to each make a future of their own—and discover at last where their true home lies....

Praise For Here and Again…

Praise for Casting Off

“A beautiful novel of letting go, healing, and redemption. Setting her story in the west of Ireland, Nicole Dickson draws the reader deeply into the magic of a mystical land. A stunning debut.”—New York Times bestselling author Susan Wiggs

“A remarkable novel about finding your true home, and of holding on and letting go. With lilting and lyrical language, Dickson immerses the reader in the lives and histories of a cluster of tightly knit families on an island off the coast of Ireland. I could hear the soft Irish voices and taste the salty spray of the ocean as Dickson worked her storytelling magic, creating characters as complex and beautiful as the Irish sweaters at the heart of the story. This was a hard-to-put-down book, and I’m already anticipating the next offering from this wonderful author.”—New York Times bestselling author Karen White

“With a pattern as intricate as the sweaters knit in the novel, Nicole Dickson weaves her words into a powerful story of redeeming love and forgiveness. Casting Off grabbed my heart on page one and didn’t let go until the last breathtaking sentence.”— New York Times bestselling author Patti Callahan Henry

Nicole Dickson lives in North Carolina with her daugther. She is the author of Casting Off.