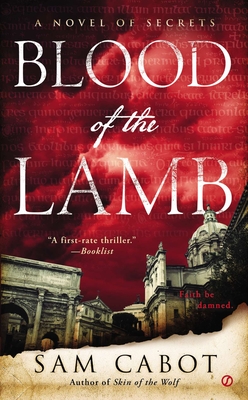 Blood of the Lamb (A Novel of Secrets #1)

Father Thomas Kelly has been called to the Vatican. A Cardinal’s desperate plea: find a missing document that contains a secret so shocking it could shatter the Church. Livia Pietro, in Rome, has been called before the Noantri Conclave. Her mission: join the Jesuit priest on his search—because one misstep could destroy her people as well.

As Thomas and Livia are thrown into a treacherous whirlwind of art, religion, and age-old secrets, they find themselves pursued by enemies who will do anything to stop them. Only the Conclave knows the true gravity of the document’s revelations. The Noantri—Livia and her people—are vampires. And the unimaginable secrets of their past are far too dangerous for man to ever know.

Praise For Blood of the Lamb (A Novel of Secrets #1)…

PRAISE FOR BLOOD OF THE LAMB

“Wow…totally unlike any novel ever written about vampires, or secret societies, or Roman art mysteries, or Vatican conspiracies. But Sam Cabot has combined all of these in this refreshing potpourri that provides us surprising and wonderful insights into each—and at the same time, endless fun!”— New York Times bestselling author Katherine Neville

“You never quite catch your breath as the secrets unfold one at a time, all the while building to a first-class conclusion. History, secrets, conspiracies, adventure. What more could you want from a thriller?”—New York Times bestselling author Steve Berry

“Just when you thought vampires were so last year, Sam Cabot’s Blood of the Lamb offers up a fresh, compelling history of the vampire. Like all great works in the genre, this one makes us think deeply about what it really means to be human. Hope there will be more in this vein!”—Leslie S. Klinger, editor of The New Annotated Dracula

“I literally could NOT put this book down once I started it! It is more of a roller-coaster read than a Dan Brown novel, with more twists and historical references to keep any history buff running a Google search screen in the background as they are reading it!... This book is just so DIFFERENT— it offers intellect and scientific reasoning combined with myth and produces a book in the vein of a Dan Brown book, but enhanced as it were, to a different level, where childish fantasies do not apply, and where the search for the great unknown exists.”—Bless Their Hearts Mom

“A heady blend of Christian mythology and ecclesiastical reality, Blood of the Lamb is an intricate puzzle of a novel—intensely researched, deeply spiritual, and profoundly sacrilegious. I loved it.”—F. Paul Wilson, New York Times bestselling author of the Repairman Jack series

“A beautiful contribution to the mystery, paranormal, and thriller genres. It’s an imaginative and historical take on an age-old topic.…Bravo, bravo.”—Bitches with Books

Carlos Dews is an associate professor and chair of the Department of English Language and Literature at John Cabot University, where he directs the Institute for Creative Writing and Literary Translation. He lives in Rome, Italy.

S. J. Rozan is the author of many critically acclaimed novels and short stories that have won crime fiction’s greatest honors, including the Edgar®, Shamus, Anthony, Macavity, and Nero awards. Born and raised in the Bronx, Rozan now lives in lower Manhattan.
Loading...
or
Not Currently Available for Direct Purchase