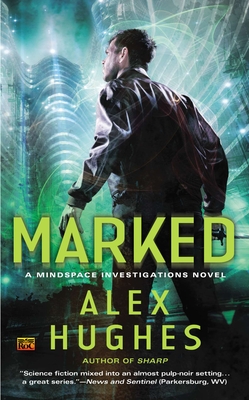 Freelancing for the Atlanta PD isn’t exactly a secure career; my job’s been on the line almost as much as my life. But it’s a paycheck, and it keeps me from falling back into the drug habit. Plus, things are looking up with my sometimes-partner, Cherabino, even if she is still simmering over the telepathic Link I created by accident.

When my ex, Kara, shows up begging for my help, I find myself heading to the last place I ever expected to set foot in again—Guild headquarters—to investigate the death of her uncle. Joining that group was a bad idea the first time. Going back when I’m unwanted is downright dangerous.

Luckily, the Guild needs me more than they’re willing to admit. Kara’s uncle was acting strange before he died—crazy strange. In fact, his madness seems to be slowly spreading through the Guild. And when an army of powerful telepaths loses their marbles, suddenly it’s a game of life or death.…

Alex Hughes has written since early childhood, and loves great stories in any form including scifi, fantasy, and mystery. Over the years, Alex has lived in many neighborhoods of the sprawling metro Atlanta area. Decatur, the neighborhood on which Clean is centered, was Alex's college home. On any given week you can find Alex in the kitchen cooking gourmet Italian food, watching hours of police procedural dramas, and typing madly. Marked is the third in the Mindspace Investigations series, following Sharp and Clean.

Praise for the Mindspace Investigations series

“A  wonderful genre blend of old-style detective stories and supernatural, with a flawed hero and a fascinating take on a world that outlaws technology.”—All Things Urban Fantasy

“A grim and gritty police detective series, with a bit of science fiction mixed into an almost pulp-noir setting…a great series for both mystery lovers and those that enjoy a bit of sci-fi.”—News and Sentinel (Parkersburg, WV)

“[Adam] is very well developed and written. Fans of Jim Butcher will enjoy this series.”—USA Today

“A fun blend of Chinatown and Blade Runner.”—James Knapp, author of State of Decay

“[A] fast-paced sci-fi yarn.…Reminds me very much (and very fondly) of Jim Butcher’s Dresden Files.”—SF Signal