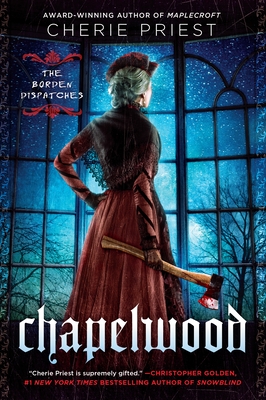 From Cherie Priest, the award-winning author of Maplecroft, comes a new tale of Lizzie Borden’s continuing war against the cosmic horrors threatening humanity…

Birmingham, Alabama is infested with malevolence. Prejudice and hatred have consumed the minds and hearts of its populace. A murderer, unimaginatively named “Harry the Hacker” by the press, has been carving up citizens with a hatchet. And from the church known as Chapelwood, an unholy gospel is being spread by a sect that worships dark gods from beyond the heavens.

This darkness calls to Lizzie Borden. It is reminiscent of an evil she had dared hoped was extinguished. The parishioners of Chapelwood plan to sacrifice a young woman to summon beings never meant to share reality with humanity. An apocalypse will follow in their wake which will scorch the earth of all life.

Unless she stops it…

Praise For Chapelwood (The Borden Dispatches #2)…

“Chapelwood is devious, twisted and beautifully written. Cherie Priest is one of our very best authors of the fantastic. Brava!”—Jonathan Maberry, New York Times bestselling author of Ghostwalkers and Predator One

“Cherie Priest is supremely gifted and Maplecroft is a remarkable novel, simultaneously beautiful and grotesque. It is at once a dark historical fantasy with roots buried deep in real-life horror and a supernatural thriller mixing Victorian drama and Lovecraftian myth.  You won’t be able to put it down.”—Christopher Golden, #1 New York Times bestselling author of Snowblind

“Maplecroft is dark and lyrical, haunting and brined in blood. It is as sharp as Lizzie Borden’s axe—and Borden herself is a horror heroine bar none.”—Chuck Wendig, author of Blackbirds

“One of the best Lovecraftian stories I’ve ever read.”—io9

Cherie Priest is the author of more than a dozen novels, including the award-winning Clockwork Century series (Boneshaker, Dreadnaught, Clementine), the Cheshire Red books (Bloodshot, Hellbent), and The Borden Dispatches (Maplecroft, Chapelwood).
Loading...
or
Not Currently Available for Direct Purchase