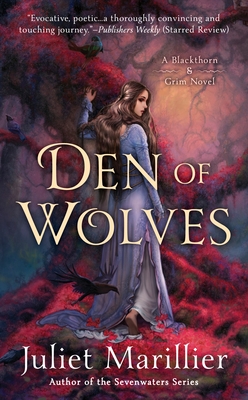 The enchanting fantasy series from the award-winning author of the Sevenwaters novels continues, as embittered healer Blackthorn and her companion, Grim, struggle to fulfill the rules of her bond to the fey. . . .

Despite her personal struggles, Blackthorn agrees to help take care of a troubled young girl who has recently been brought to court, while Grim is sent to the girl’s home at Wolf Glen to aid her wealthy father with a strange task—repairing a broken-down house deep in the woods. It doesn’t take Grim long to realize that everything in Wolf Glen is not as it seems—the place is full of perilous secrets and deadly lies. . . .

Back at Winterfalls, the evil touch of Blackthorn’s sworn enemy reopens old wounds and fuels her long-simmering passion for justice. With danger on two fronts, Blackthorn and Grim are faced with a heartbreaking choice—to stand once again by each other’s side or to fight their battles alone.

Praise for Den of Wolves and the Blackthorn & Grim Novels

Juliet Marillier was born in Dunedin, New Zealand, a town with strong Scottish roots. She graduated from the University of Otago with degrees in languages and music, and has had a varied career that includes teaching and performing music as well as working in government agencies. Juliet now lives in a hundred-year-old cottage near the river in Perth, Western Australia, where she writes full-time. She is a member of the druid order OBOD. Juliet is active in the field of animal rescue and shares her home with a small pack of waifs and strays. She is the author of the Blackthorn & Grim novels, including Tower of Thorns and Dreamer’s Pool, and the Sevenwaters series, including Flame of Sevenwaters and Seer of Sevenwaters. Her historical fantasy novels and short stories are published internationally and have won a number of awards.
Loading...
or support indie stores by buying on