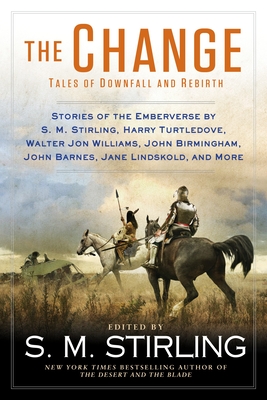 The Change (A Novel of the Change)

“[A] vivid portrait of a world gone insane,”* S. M. Stirling’s New York Times bestselling Novels of the Change have depicted a vivid, utterly persuasive, and absorbingly unpredictable postapocalyptic wasteland in which all modern technology has been left in ashes, forcing humankind to rebuild an unknowable new world in the wake of unimaginable—and deliberate—chaos.

In The Change: Tales of Downfall and Rebirth, S. M. Stirling invites the most fertile minds in science fiction to join him in expanding his rich Emberverse canvas. Here are inventive new perspectives on the cultures, the survivors, and the battles arising across the years and across the globe following the Change—from the ruins of Sydney to the Republic of Fargo and Northern Alberta to Venetian and Greek galleys clashing in the Mediterranean.

These adventures revisit beloved people and places from Stirling’s fantastic universe, introduce us to new ones, and deliver endlessly fascinating challenges to conquer.

Praise For The Change (A Novel of the Change)…