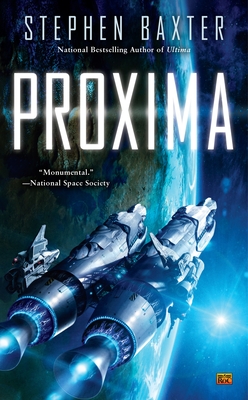 “Stephen Baxter has been heralded, with some merit, as Arthur C. Clarke’s literary heir, and Proxima certainly reinforces this accolade in spades.”—Concatenation

Mankind’s future in this galaxy could be all but infinite.

There are hundreds of billions of red dwarf stars, lasting trillions of years—and their planets can be habitable for humans. Such is the world of Proxima Centauri. And its promise could mean the never-ending existence of humanity.

But first it must be colonized, and no one wants to be a settler. There is no glamor that accompanies it, nor is there the ease of becoming a citizen of an already-tamed world. There is only hardship...loneliness...emptiness, even as war brews in the solar system.

But that’s where Yuri comes in. Because sometimes exploration isn’t voluntary. It must be coerced.

Praise For Proxima (A Proxima Novel #1)…

“An epic of interstellar pioneering and solar-system expansion.”—Locus

“[Proxima] is quite simply breathtaking.”—SFBook.com

Stephen Baxter is the national bestselling author of Ark and Flood. He is a winner of the British Science Fiction Award and the Locus Award, as well as a nominee for several Arthur C. Clarke and Hugo awards. His novel Voyage won the Sidewise Award for the best alternate history novel of the year, and he won the Philip K. Dick Award twice, for The Time Ships and for Vacuum Diagrams. He was also a recipient of the John W. Campbell Award for The Time Ships.
Loading...
or
Not Currently Available for Direct Purchase