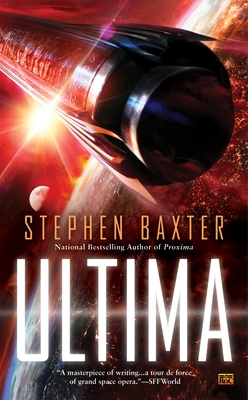 Hailed as “one of the most inventive writers that science fiction has ever produced” (SF Site), Stephen Baxter builds on the massive success of Proxima with a career-defining novel of big ideas....

On the planet of Per Ardua, alien artifacts were discovered—hatches that allowed humans to step across light-years of space as if they were stepping into another room. But this newfound freedom has consequences....

As humanity discovers the real nature of the universe, a terrifying truth comes to light. We all have countless pasts converging in this present—and our future is terrifyingly finite. There are minds in the universe that are billions of years old and now we are vulnerable to their plans for us....

It’s time to fight back and take control.

Praise For Ultima (A Proxima Novel)…

“Baxter is at his best again...Brilliant.”—Tor.com

Stephen Baxter, author of the space duology featuring Proxima and Ultima, is the national bestselling author of Ark and Flood. He is a winner of the British Science Fiction Award and the Locus Award. His novel Voyage won the Sidewise Award for the best alternate history novel of the year, and he won the Philip K. Dick Award twice, for The Time Ships and for Vacuum Diagrams. He was also a recipient of the John W. Campbell Award for The Time Ships.
Loading...
or support indie stores by buying on