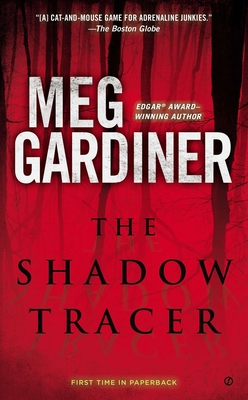 Sarah Keller is a skip tracer, tracking criminals who have gone on the lam. She’s also a single mother to five-year-old Zoe, living quietly in small-town Oklahoma—until an accident sends Zoe to the ER, and their life changes in a heartbeat. Medical tests reveal a desperate secret Sarah has been hiding for years: Zoe is not her daughter, but rather a girl once rescued from a nightmare of murder, vengeance, and harrowing family ties she can’t possibly remember. Sarah does. And someone wants to make sure she never forgets.

Now Sarah must abandon her carefully constructed life and take Zoe on the run. Using her knowledge as a skip tracer to stay off the grid, she must remain one step ahead of her pursuers if she is to stay alive, save Zoe, and bury the past once and for all.

Praise For The Shadow Tracer: A Thriller…

Praise for The Shadow Tracer

“A plot-driven cat-and-mouse game for adrenaline junkies with surprises in every chapter.”—The Boston Globe

“Gardiner lifts the suspense to an almost unbearable level.”—Bookreporter.com

“Gardiner will keep you up half the night with nonstop action and nary a pause for breath.”—Kirkus Reviews (starred review)

“Should not be missed.”—Library Journal

Further praise for Meg Gardiner, hailed by Stephen King as “the next suspense susperstar.”

“A high-wire act with suspects and subplots whizzing back and forth between action-packed chapters.”—The Washington Post

“A first class thriller…that will have you glued to the pages.”—Chicago Sun-Times

“A humdinger of a thriller, with shocks and twists galore.”—Tess Gerritsen

“A book no reader of thrillers will be able to put down...Meg Gardiner gives us everything.”—Elizabeth George

Meg Gardiner is the author of eleven critically acclaimed novels, including the Evan Delaney series: Mission Canyon, Jericho Point, Crosscut, and the Edgar® Award winning China Lake. She is also the author of The Shadow Tracer, The Nightmare Thief, The Liar’s Lullaby (a Stephen King Entertainment Weekly “Pick Hit”), The Memory Collector, and The Nightmare Thief. Originally from Santa Barbara, California, she divides her time between London and Austin.
Loading...
or
Not Currently Available for Direct Purchase