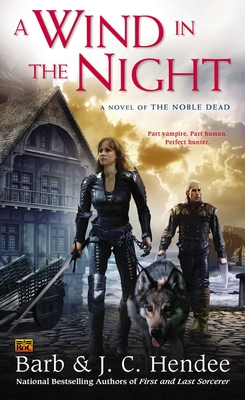 In her quest to find the orb of Spirit, Wynn Hygeorht is torn between two men who hate each other—her vampire protector, Chane Andraso, and the elf Osha, who has feelings for her.

Now a strange series of clues leads them to a remote keep built on the dark cliffs of the coast of Witeny—where an old enemy lurks, ready to destroy her. At the same time, dhampir Magiere, Leesil, and Chap continue their desperate search for the orb of Air. Still hunted by a team of assassins, they escape on the first available ship, only to find themselves under the power of a sadistic captain.

Yet even if they manage to survive this voyage, what waits for them at the journey’s end is beyond anything they can imagine....

Barb and J. C. Hendee live in a quirky little town near Portland, Oregon, with two geriatric and quite demanding cats. Barb’s short fiction has appeared in numerous genre magazines and anthologies. She is the author of the Vampire Memories and Mist-Torn Witches series. J.C.’s poetry, nonfiction, and short fiction have also appeared in many genre magazines. They are the authors of The Dog in the Dark, Between Their Worlds, and Of Truth and Beasts.

Praise for the Noble Dead Saga:

“The Noble Dead saga...is no simple myth, but rather a true epic, which stands at the highest levels of fantasy lore.”—BSCreview

“A mix of The Lord of the Rings and Buffy the Vampire Slayer.”—New York Times bestselling author Kevin J. Anderson
or support indie stores by buying on
(This book is on backorder)
Copyright © 2020 American Booksellers Association