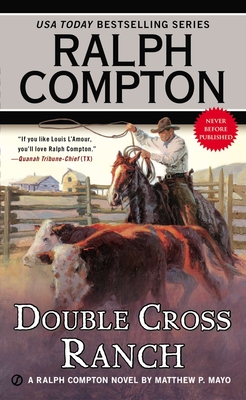 A rancher fights to save the woman he loves in this Ralph Compton western...

Rancher Ty Farraday’s hunt for stray cattle takes a turn for the worse when he discovers a shallow grave and the body of wealthy Alton Winstead, the owner of the Double-Cross Ranch. Ty’s first frantic thoughts are of Winstead’s widow, Sue-Ellen, who picked Alton over him. Unfortunately, she chose poorly.

Alton masterminded a crime and left his helpers to swing for it. Hungry for revenge, the murderous headcases have overrun the Double-Cross and are holding Sue-Ellen prisoner. They believe she’s harboring some very important information. Ty boldly rescues her from the ranch—only to find their troubles are only beginning...

Matthew P. Mayo is a Western Writers of America Spur Award-Winner and a Western Fictioneers Peacemaker Award Finalist. His short stories have appeared in numerous anthologies and his many novels include the Westerns Winters' War, Wrong Town, Hot Lead, Cold Heart, Dead Man's Ranch, Tucker's Reckoning, The Hunted, and Shotgun Charlie. He contributes to several popular series of Western and adventure novels.
Loading...
or support indie stores by buying on