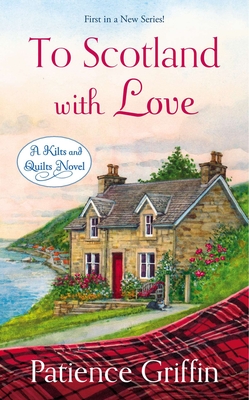 To Scotland with Love (Kilts and Quilts #1)

Welcome to the charming Scottish seaside town of Gandiegow—where two people have returned home for different reasons, but to find the same thing.…

Caitriona Macleod gave up her career as an investigative reporter for the role of perfect wife. But after her husband is found dead in his mistress’s bed, a devastated Cait leaves Chicago for the birthplace she hasn’t seen since she was a child. She’s hoping to heal and to reconnect with her gran. The last thing she expects to find in Gandiegow is the Sexiest Man Alive! She just may have stumbled on the ticket to reigniting her career—if her heart doesn’t get in the way.

Graham Buchanan is a movie star with many secrets. A Gandiegow native, he frequently hides out in his hometown between films. He also has a son he’ll do anything to protect. But Cait Macleod is too damn appealing—even if she is a journalist.

Quilting with her gran and the other women of the village brings Cait a peace she hasn’t known in years. But if she turns in the story about Graham, Gandiegow will never forgive her for betraying one of its own. Should she suffer the consequences to resurrect her career? Or listen to her battered and bruised heart and give love another chance?

Praise For To Scotland with Love (Kilts and Quilts #1)…

“A reclusive movie star and heartbroken journalist form an unlikely pair in this alluring contemporary debut. . .Griffin’s lyrical and moving debut marks her as a most talented newcomer to the romance genre.” – Publishers Weekly (starred review)

“Patience Griffin has created an utterly charming old-fashioned town as the setting for her new  Kilts & Quilts series, and the town becomes as significant to the story as any living, breathing character. . .Delightful. . .The beginning of a very promising series.” – RT Book Reviews

“Keep your kleenex available at all times. This is truly a heart-jerking tale of emotions running on high. . .a tale you won't be able to forget. This nostalgic story got to my heart from the first page and kept me on the edge. . .To Scotland with Love is an excellent tale from a very gifted author and I cannot express how deeply this affected me. A truly spectacular story.” – Fresh Fiction

Patience Griffin grew up in a small town along the Mississippi River, enjoying life in a tight-knit community. She loves to quilt and has gained recognition with her September 11th Story Quilt, which has toured the country and is currently hanging in the Pentagon. She has a master’s degree in nuclear engineering but spends her days writing stories about hearth and home and dreaming about the fictional small town of Gandiegow, Scotland.
Loading...
or
Not Currently Available for Direct Purchase