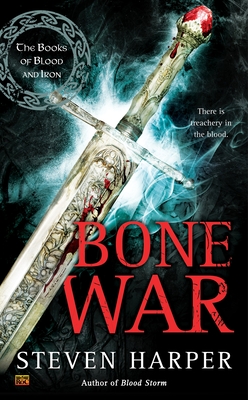 Bone War (The Books of Blood and Iron #3)

The author of Blood Storm and Iron Axe returns with the third Book of Blood and Iron—where Danr the half-troll must stop two vengeful queens from razing the world to the ground...

From their sacred Garden, the three fates control all life and maintain balance in the world. But one of the fates has been captured by the evil elf queen, placing the future of every being, including Death herself, in jeopardy. And only one hero can defeat the elf queen: Danr the half-troll.

In order to rescue the missing fate, Danr must first acquire the fabled Bone Sword. Normally Danr would expect his companions to help. However, they are currently in pursuit of a mysterious creature who seems both oddly familiar yet dangerously unknown. But one thing is certain for all of the adventurers: failure is not an option.

Praise For Bone War (The Books of Blood and Iron #3)…

Praise for the Books of Blood and Iron

“[Turns] common tropes on their heads....His reinterpretations of trolls, giants, and fae folk give this series opener a fresh feeling, while his nods to Norse mythology and folklore root it strongly in fantasy tradition.”—Publishers Weekly

“Brought back fond memories of a classic fantasy book while still offering a wonderfully unique take on the genre....Steven Harper created a world that I never got tired of exploring.”—The Qwillery

“The story holds all of the adventure, magic, and mystery I have come to expect from the genre....[It] follows a hero’s journey...with energy and artfulness.”—Wicked Little Pixie

Steven Harper Piziks was born with a name no one can reliably pronounce, so he usually writes under the pen name Steven Harper. He sold a short story on his first try way back in 1990. Since then, he’s written twenty-odd novels, including the Clockwork Empire steampunk series (The Havoc Machine, The Dragon Men) and the Books of Blood and Iron fantasy series (Blood Storm, Iron Axe).

When not writing, Steven teaches English in southeast Michigan. He also plays the folk harp, wrestles with his kids, and embarrasses his youngest son in public.
Loading...
or support indie stores by buying on