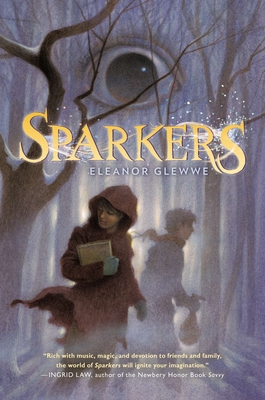 A magical world that will captivate fans of Kate DiCamillo and Diana Wynne Jones.

Marah Levi is a promising violinist who excels at school and can read more languages than most librarians. Even so, she has little hope of a bright future: she is a sparker, a member of the oppressed lower class in a society run by magicians.

Then a mysterious disease hits the city of Ashara, turning its victims’ eyes dark before ultimately killing them. As Marah watches those whom she loves most fall ill, she finds an unlikely friend in Azariah, a wealthy magician boy. Together they pursue a cure in secret, but more people are dying every day, and time is running out. Then Marah and Azariah make a shocking discovery that turns inside-out everything they thought they knew about magic and about Ashara, their home.

Set in an imaginative world rich with language, lore, and music, this gripping adventure plunges the reader into the heart of a magical government where sparks of dissent may be even more deadly than the dark eyes.

Eleanor Glewwe was born in Washington, D.C. and grew up in Minnesota. Her parents sent her to French immersion school in kindergarten, and she began studying Mandarin in high school. At various points in her life, she has also attempted to teach herself Cantonese, German, Spanish, Hindi, Ancient Greek, and Turkish. She plays the cello and used to host music parties for her friends, arranging Renaissance dances and Baroque concerti grossi for unorthodox instrumentation. She plays the cello and once braved a snowstorm to perform in a chamber music competition. At Swarthmore College, she studied linguistics, French, and Chinese and worked in the music library, shelving composers’ biographies and binding scores with a needle and thread. More recently, she haunted the tunnels under the Minnesota State Capitol as a legislative advocate. In addition to being a writer, Eleanor is a folk dancer and a Sacred Harp singer. Eleanor lives in Los Angeles, where she is a graduate student in linguistics.

"This book holds all that fantasy readers could desire: magic, intrigue, mysterious characters, ancient curses, and a dark evil that must be defeated. Not everything is wrapped up neatly, and the various characters are multilayerd, neither all good nor all bad. A worthy and worthwhile stand-alone book in a genre so often serialized." —School Library Journal

"Marah is a fully realized character, a young woman with intelligence, curiosity, conviction, and fierce loyalty to her loved ones. A rich cast of supporting characters gives Marah’s world a very realistic complexity that goes beyond good and evil. . . . Will please socially conscious readers with a taste for light fantasy.” —VOYA

"Strong, believable characters and an important message. . . Middle-school novels rarely address social injustice so clearly, and this first novel does so in a way that empowers young people to think of ways to make a difference." —Booklist

"Marah is an appealing heroine—warm, compassionate, and smart—and the plot pleases by requiring Marah and Azariah to develop and use their special talents to save the city while losing a small bit of their innocence. . . Marah’s talents extend to an ability to pour out her emotions in virtuoso violin music; similarly multitalented middle graders will find in her a kindred spirit." —The Bulletin of the Center for Children's Books