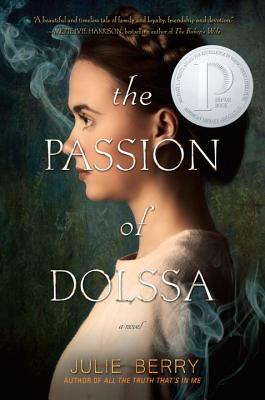 The Printz Honor winner that garnered five starred reviews and was hailed by the New York Times as "magnificent"!

Dolssa is an upper-crust city girl who's been branded a heretic, on the run from the friar who condemned her mother to death by fire and wants Dolssa executed, too. Botille is a matchmaker and a tavern-keeper, struggling to keep herself and her sisters on the right side of the law in their seaside town. When their lives collide by a dark riverside, Botille rescues a dying Dolssa and conceals her in the tavern, where an unlikely friendship blooms. Aided by her sisters and Symo, her surly but loyal neighbor, Botille nurses Dolssa back to health and hides her from her pursuers. But all of Botille’s tricks, tales, and cleverness can’t protect them forever, and when the full wrath of the Church bears down upon them, Dolssa’s passion and Botille’s good intentions could destroy the entire village.

From the author of the critically acclaimed and award-winning All the Truth That's in Me comes a spellbinding thriller that will keep you on the edge of your seat until the final page and make you wonder if miracles really are possible.

Praise For The Passion of Dolssa…

PRAISE FOR The Passion of Dolssa:

* "Berry again delivers an utterly original and instantly engrossing story [...] she weaves a tense, moving portrait of these two teenage girls and their struggle to survive against insurmountable odds." --Starred Review, Publishers Weekly

* "This beautifully crafted plot would be enough on its own, but Berry does so much more . . . despite the book’s gravity, Berry also manages to infuse her story with laughter and light." --Starred Review, Booklist

Julie Berry grew up in western New York. She holds a BS from Rensselaer in communication and an MFA from Vermont College in writing for children and young adults. She now lives in southern California with her husband and four sons. All the Truth That’s in Me (September 2013, Viking) was Julie’s first young adult novel. It earned five starred reviews and garnered widespread critical praise. It was nominated for the Edgar Award for Young Adult Mystery, and shortlisted for the Carnegie Medal (UK), and was the recipient of the 2014 Silver Inky award, the Whitney Award for YA, and the Westchester Fiction Prize. Julie is also the author of seven other critically acclaimed titles for young readers. Her works appear in international versions worldwide. Prior to becoming an author, she worked in software sales and marketing. Find her online at www.julieberrybooks.com, or on Twitter at @julieberrybooks.
Loading...
or
Not Currently Available for Direct Purchase