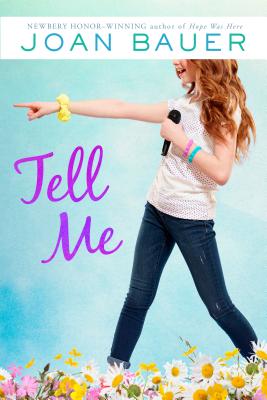 The unofficial town motto is "Nothing bad ever happens in Rosemont" where  twelve-year-old Anna has come to stay with her grandmother, Mim, hoping to forget her worries about her parents' troubled marriage.  She'll be busy with the town's annual Flower Festival, a celebration with floats and bands that requires weeks of preparations.

But before long, Anna finds herself involved in a very big problem. When she observes a girl her own age who seems to be being held against her will, Anna can't forget the girl's frightened eyes and she is determined to investigate. "When you see something, say something" she's been told—but what good does it do to speak if no one will listen? Luckily, a take-charge girl like Anna is not going to give up.

Told with Joan Bauer's trademark mixture of humor and heart, Tell Me will enthrall her many fans and win her new ones.

Joan Bauer is the author of eleven previous novels for young readers, among them the Newbery Honor Book, Hope Was Here, and the Los Angeles Times Prize winner, Rules of the Road.  She has also twice received the Christopher Award, as well as the Schneider Family Book Award and the Golden Kite Award. Joan Bauer lives in Brooklyn, New York.

Praise For Tell Me…

Praise for Tell Me:

"Bauer establishes a multi-faceted plot combining crime drama with a modern coming of age story. Anna’s voice rings clear through first-person narration, allowing readers to sing, cry, and smell the flowers along with the protagonist. Short chapters and smart  dialogue keep the pace moving. Ultimately, Bauer twists the widespread divorce issue into a lesson on empathy, inviting readers to keep their minds and eyes alert to worlds other than their own." —School Library Journal

"In this novel filled with comedy and drama. . . Bauer skillfully weaves subplots together as Rosemont citizens (and Anna's parents) rise to the challenge of solving the mystery." —Publishers Weekly

"There are numerous, valuable messages for readers here: pay attention, trust your instincts, and speak up; sometimes being brave is about small, uncertain steps that we take; and helping others helps us, too. Humor and hope are balanced throughout, making this a good recommendation for those who prefer a serious topic treated with a less heavy hand and a happy ending." —VOYA

"Bauer manages the difficult feat of folding the topic of human trafficking into a middle-grade novel about daily-life family and peer struggles; in fact, Anna’s conviction that the missing girl matters is part and parcel of her character throughout, as she similarly commits whole-heartedly to her acting efforts and beloved friends. . . Readers will appreciate the story for Bauer’s classic and relatable heroine who pursues her goal through adversity." —BCCB

"Bauer has done an exceptional job of informing young readers about human trafficking without being heavy-handed or speaking down to her audience." —LMC