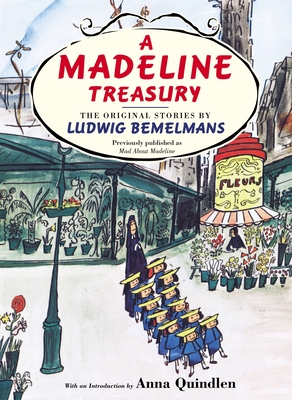 The Original Stories by Ludwig Bemelmans

“In an old house in Paris
that was covered with vines
lived twelve little girls
in two straight lines
the smallest one was Madeline.”

A complete collection of all the adventures of Madeline, a fearless little girl full of mischief and vitality. Madeline, first published in 1939, and its five sequels have charmed generations of readers, and have become true classics.

Celebrate one of the world’s most popular and beloved fictional characters with this beautiful, deluxe collection, bringing together all six of the Madeline books in one volume. In each of these books, Bemelmans’ humorous verse, his immortal characters—Miss Clavel, Pepito, the magician, the others—and his wonderful, whimsical drawings of Paris combine to create a memorable reading experience for people of all ages.

Pulitzer Prize-winning journalist Anna Quindlen has written an introduction to the collection, which also includes “The Isle of God,” an essay by Bemelmans on how he invented Madeline, and never-before-published working sketches of Madeline, as well as photos of the Bemelmans family.

Ludwig Bemelmans was a painter, illustrator, and writer of more than three dozen books for both adults and children. Born in 1898 in a part of Tirol now known as Merano, Italy, he came to the United States in 1914 and, after spending Christmas Eve on Ellis Island, set up residence in New York City. Before finding his voice as a writer, he worked in a hotel and ran his own restaurant. Later Bemelmans became a novelist and a nonfiction writer, as well as a frequent contributor to The New Yorker (for which he drew many covers), Town and Country, Holiday, and Vogue; and he also wrote a screenplay in Hollywood. He penned the first draft of Madeline on the backs of menus in Pete's Tavern. He is best known for his Madeline books, which rank among the most honored children's books ever. Madeline was named a Caldecott Honor Book; and the first of its five sequels, Madeline's Rescue, won the Caldecott Medal and was a New York Times Outstanding Book of the Year. A world traveler, Bemelmans was renowned as a true cosmopolite, an irreverent and droll chronicler of the incongruous, an elegant man-about-town, a merry observer of the improbable and the absurd. He died in 1962 after completing the sixth story about Madeline, Madeline's Christmas.
Loading...
or support indie stores by buying on